Race: NTN presents 2019 Tour of Japan Stage 8 TOKYO Stage
Date: 2019.MAY.26. (SUNDAY)
Weather: Sunny
Tempature : 33℃
Number of Spectators: 48,000
The 8th day of NTN presents 2019 Tour of Japan finally arrived in the final stage, Tokyo.
Tokyo stage always shows very fast sprint battles in 112 km circuit in Oi Futo (Oi Wharf Circuit), making 16 laps of 7 km this year.
If Chris HARPER (TEAM BRIDGELANE) can completely finish the race, his Green Jersey is confirmed, but the team also wants to win the stage.  All other teams, of course, targeted to win the Tokyo stage and road races always don’t know what happens till the end.  Everyone could not take their eyes off on the race, how the race will be ended. 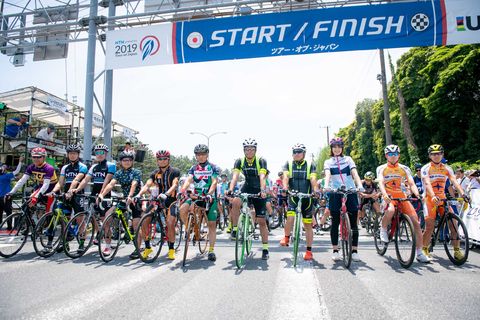 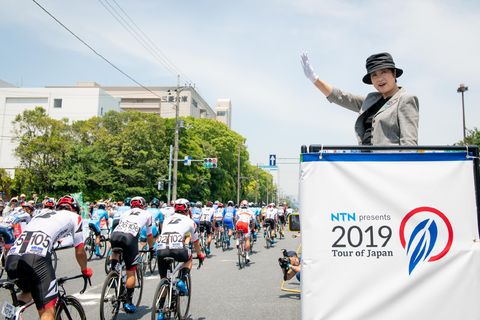 The Governor of Tokyo, Yuriko KOIKE served as a starter and gorgeously opened parade run which was perfect for the last Tokyo stage of Tour of Japan.
From the start of neutral, atmosphere among riders was very intense and many of them focused on only one chance to win.
Right after the actual start, 4 riders all at once sparked from the bunch and 5 riders chased them.  Totally 9 riders formed a breakaway and finished one lap, but soon in the second lap, the break was caught by peloton.  It was highly expected that many attacks would be repeated, but the defending champion, Marcos GARCIA FERNANDEZ (KINAN CYCLING TEAM) made a solo attack, as if he was letting off steam, and made 1-minute time gap to the peloton.  His one strong attack made the main group quietly let him go.
Then, Marcos’s teammate, Salvador GUARDIOLA TORA and two other riders chased Marcos from the peloton and caught up Marcos GARCIA FERNANDEZ in the 4th lap.
The front group worked together to expand the time gap to peloton and it became about 3 minutes and 10 seconds at most.  The peloton was controlled by TEAM BRIDGELANE with the race leader, Chris HARPER and gradually increased the speed from the 8th lap.  The time gap between the front and main group was reduced by 30 seconds every one lap.  When the time gap was less than two minutes which was just before starting the 5th lap, Marcos GARCIA FERNANDEZ made an attack again which shows full of spirit to win this stage.  His teammate, Salvador GUARDIOLA TORA reacted Marcos’s attack and joined him to support for the final attack.  This two-rider breakaway continued for 4 laps and was finally caught by the peloton in the last lap. 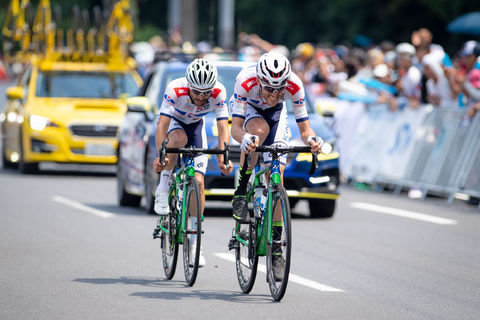 For a sprint finish, many teams wanted to be in a good position.  Teams which want a stage victory or riders who want to win Blue Jersey Wearer, such several thoughts were crossed, and riders turned the last corner and headed to sprint finish battle.  Kazushige KUBOKI (TEAM BRIDGESTONE CYCLING) won this sprint finish and made his first victory at Tour of Japan.  Chris HARPER (TEAM BRIDGELANE) finished 24th with the same time as the top and confirmed both GC victory and White Jersey Wearer or Best Young Rider.  Blue Jersey Wearer went to Federico ZURLO (GIOTTI VICTORIA-PALOMAR) who finished 2nd today and added points.  Filippo ZACCANTI (NIPPO – VINI FANTINI - FAIZANé) won Red Jersey Wearer, General King of Mountain Classification and TEAM UKYO celebrated General Team Time Classification.  All prizes have been fixed and closed the curtain of NTN presents 2019 Tour of Japan. 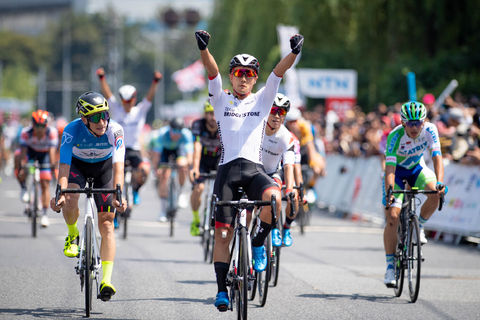 Chris HARPER (TEAM BRIDGELANE) :
General Individual Time Classification (Green Jersey)
General Young Riders Classification (White Jersey)
“We, as a team, could see control today and hopefully a sprinter’s team would take over to go to the stage win, which they did.  So, always it was a plan.”
Federico ZURLO (GIOTTI VICTORIA-PALOMAR) :
General Points Classification (Blue Jersey)
“Today is good.  I think KUBOKI was too strong for me today.  I need a point for this jersey.  I tried to win the stage, but KUBOKI was strong.  I am happy anyway.”
Filippo ZACCANTI (NIPPO – VINI FANTINI - FAIZANé) :
General King of Mountain Classification (Red Jersey)
“It was very hard course, but I confirmed to be Red Jersey Wearer yesterday, so that I could be calm to race today.”
Kazushige KUBOKI (TEAM BRIDGESTONE CYCLING) : TOKYO Stage Winner
“Our team’s plan targeted to win the stage by sprint finish and Blue Jersey Wearer.  It is pity that we could not get Blue Jersey, but I am satisfied to complete our mission which is the stage victory.”
ニュース