Race: NTN presents 2019 Tour of Japan Stage 7 IZU Stage
Date: 2019.MAY.25. (SATURDAY)
Weather: Sunny
Tempature : 31℃
Number of Spectators: 21,500
The 7th Stage of NTN presents 2019 Tour of Japan came to Izu Peninsula, Shizuoka prefecture on Saturday, 25th May.  The course today consisted of only uphill and downhill with almost no flat road.  The race was held around Japan Cycling Sports Center and the total distance is 122 km, making ten laps of 12.2 km per lap.
Until IZU stage today, it was a very competitive race to win General Classification this year and 5 riders were in 1-minute time gap to the top and 10 riders were within
2-minite time gap to the top.  Many fans in IZU stage today could witness the severe competition for GC. 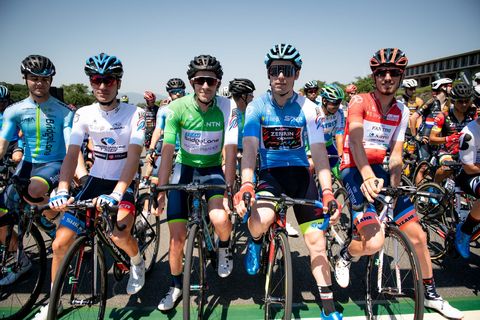 Several attacks right after the actual started and split riders to more than three groups. Green Jersey Wearer, Chris HARPER (TEAM BRIDGELANE) was shaken by some teams, mainly by TEAM UKYO which has the 2nd rider in GC, UTSUNOMIYA BLITZEN and KINAN CYCLING TEAM with the defending champion, Marcos GARCIA FERNANDEZ which has no hope to win GC this year, but wants to do something.
In the 2nd lap, 8 riders, such as Marcos GARCIA FERNANDEZ, Benjami PRADES REVERTER (TEAM UKYO) formed a powerful breakaway and put heavy pressure on TEAM BRIDGELANE.  Chris HARPER, himself worked hard to lead the main group, tried to reduce the time gap between the break and the peloton and finally in the third lap, the main group caught the breakaway.  This movement made the peloton smaller, to 30-40 riders in the end of the second lap.
In the 3rd lap, Federico ZURLO (GIOTTI VICTORIA-PALOMAR) attacked from the 8-rider breakaway and increased the time gap, 2 minutes 44 seconds to the second main group and 4 minutes 45 seconds to the peloton by the end of the 5th lap. 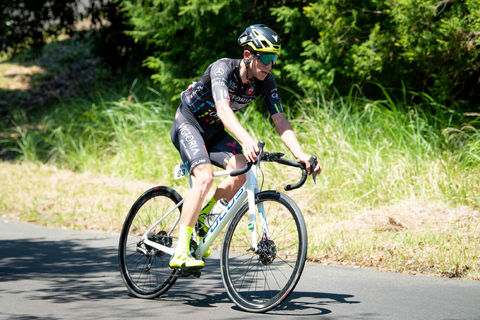 In the 6th lap, when the peloton started to chase the front group on the downhill, the 3rd in GC, Metkel EYOB (TERENGGANU INC.TSG CYCLING TEAM) and Nariyuki MASUDA (UTSUNOMIYA BLITZEN), 4th in GC crashed together.  Assist members of UTSUNOMIYA BLITZEN completely stopped to wait for their ace, MASUDA and tried to take him back to the main group.  On the other hand, Metkel EYOB stopped the race by this crash.
In the 8th lap, the second main group finally caught Federico ZURLO and again formed 8-rider break with time gap of 1 minute 20 seconds to the peloton.  Chris HARPER felt risk to leave this breakaway and escaped from the peloton, because Sam CROME who was 9th in GC today was in the breakaway.  Then the 2nd main group or chasing group was formed by 10 riders and the time gap to the break was reduced to 50 seconds.
In the end of 9th lap, the chasing group successfully caught the breakaway and entered the final lap. 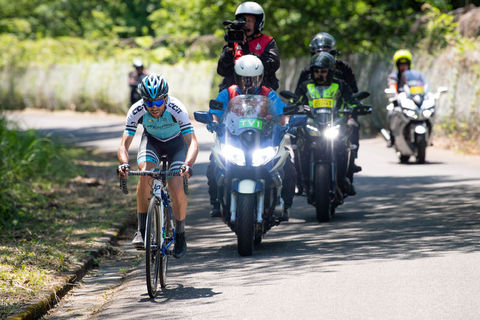 Pablo TORRES MUIñO (INTERPRO CYCLING ACADEMY) made a solo attack, but it was not affected for GC order, so that the main group allowed to let him go alone.  Pablo TORRES MUIñO continued a solo run and crossed the finish line first and won the IZU stage.
Chris HARPER managed several attacks by top rank riders, thanks to his teammate, but also by himself.  In the end, HARPER finished 8th with 16-min time gap behind the top and kept 40 seconds time gap to the 2nd in GC, Benjami PRADES REVERTER (TEAM UKYO).
Finally, it will be the final stage of NTN presents 2019 Tour of Japan, TOKYO stage and Chris HARPER is almost to have a victory in his hand, but the race this year cannot easily forecast and people must keep their eyes open to watch the race until the end. 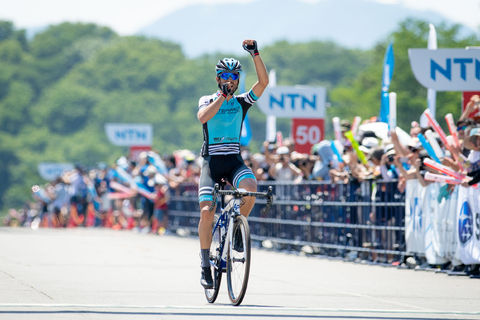 Pablo TORRES MUIñO (INTERPRO CYCLING ACADEMY)：
“I am very happy to win today.  Our team has prepared well for the Tour of Japan, so that it is great to have a win in the first half of the race season and also in our team’s home country.  I am sure that we will celebrate today’s victory as a team tonight.”
Chris HARPER (TEAM BRIDGELANE)：
“I am very happy.  It was very hard and I could defend to wear Green Jersey on.  Just very long hard day, but my teammates was incredible to be in the front from the start to make sure to get a green jersey again.  I can’t think enough for all their hard work that they did.”
ニュース