Benjamin HILL (LJUBLJANA GUSTO SANTIC) pulls the victory by an astonishing attack in the last lap! 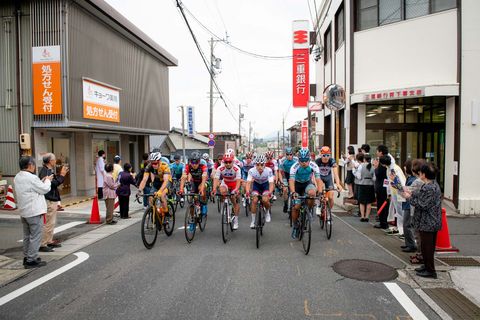 The third stage of Tour of Japan was held in Inabe city, where is located in the northern end of Mie prefecture on Tuesday, 21st May, 2019.  The peloton started parade run in front of Ageki station of Sangi Hokusei Line, head to the circuit and coursed in the middle of the circuit of 14.8 km per lap, 127km in total.  Three riders were DNF (did not finish) in the second stage and 93 riders officially made an entry today.  The uphill in just 1km before the finish line is now named “INABERG” which is decisive point for the victory in Inabe stage. 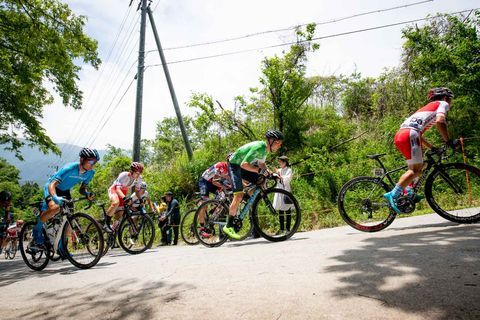 Soon after the actual start, many riders battled to actively attack, but all of them were not successful and finished the first one lap.  The reason why many attacks were seen is King of Mountain point which is set in 1 km after the finish line in the second lap.  No teams which target to get UCI points allow anyone to escape from the peloton in the first lap.
The first KOM point was won and got 5 UCI points by Philippo ZACCANTI (NIPPO – VINI FANTINI - FAIZANé) who has competed neck and neck yesterday and battled with Adrian GUILLONNET (INTERPRO CYCLING ACADEMY) again today.  This means that Red Jersey in the third stage was almost fixed to ZACCANTI.
While the peloton was relaxed in the downhill after the KOM point, Marino KOBAYASHI (GIOTTI VICTORIA – PALOMAR), Hideto NAKANE (NIPPO – VINI FANTINI FAIZANé) and 5 other riders attacked and formed a breakaway with 30 seconds time gap, but in the finish line of the second lap, the breakaway was caught by peloton.  In the third lap, Emil DIMA (GIOTTI VICTORIA – PALOMAR) made an attack in the downhill and Per Christian MüNSTERMANN (TEAM SAUERLAND NRW P/B SKS GERMANY) solely chased DIMA.  Finally, the race was settled down and the time gap between the breakaway and the peloton was more than 4 minutes.  In the 6th lap, KINAN CYCLING TEAM which is the home team for the third stage Inabe started to control the peloton and apparently showed the will to chase the front group and shortened the time gap from 5 minutes at a maximum to less than two minutes.  In the 7th lap, when the time gap to the peloton was less than 1 minute, Emil DIMA (GIOTTI VICTORIA – PALOMAR) tried to attack a few times, but was caught by the peloton soon and returned to the starting point.
In the last lap, Benjamin HILL (LJUBLJANA GUSTO SANTIC) and Adam ŤOUPALíK (TEAM SAUERLAND NRW P/B SKS GERMANY) attacked again in the downhill and left the peloton in the blink of an eye.  In 3 km to go, the time gap to the peloton was only 25 seconds and the final battle was seen in “INABERG”, the specialty of the Inabe stage.  Benjamin’s strong climbing and sprint power showed off to win the third stage in the end.  Adam ŤOUPALíK finished second with the same time as HILL’S and Orluis AULAR (MATRIX POWERTAG) crossed the finish line in the third place, coming out from the peloton. 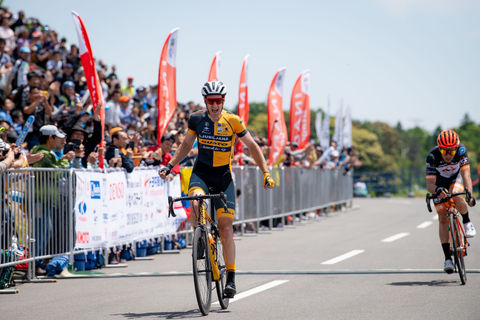 Benjamin HILL (LJUBLJANA GUSTO SANTIC)
“At the start, there was a clash.  I had to change my bike which was my teammate’s bike and too big for me, so that I changed it again, but it was also my teammate’s bike.  All day, when I chased the front, it was uncomfortable and I though the race was over already.  But we got back, I thought it’s Ok, it’s just warm-up and get hard something.  After that, I felt really good.  The boys said they would do everything for me today and really well to send me in a good position last time.  When I attacked, Adam worked together, all the way to the finish line and I couldn’t believe in the last 100 meters that I made to come out to see the finish line.  It was absolutely a special one.” 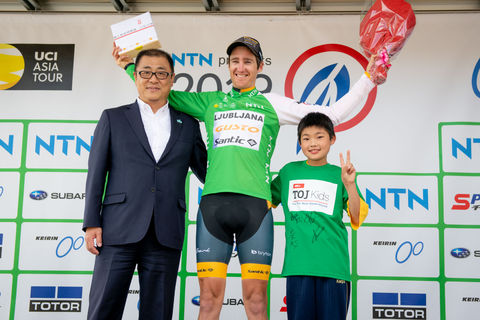 Kazushige KUBOKI (TEAM BRIDGESTONE CYCLING)
“The team plan was to win by my sprint, but in the flat course after the last downhill, two riders made an attack and no teams tried to catch them.  I wanted to be in the top of the bunch sprint in the last, but finished fourth or second of the bunch sprint.  I am happy to get Blue Jersey anyway, but I really wanted to win the stage today.”
ニュース