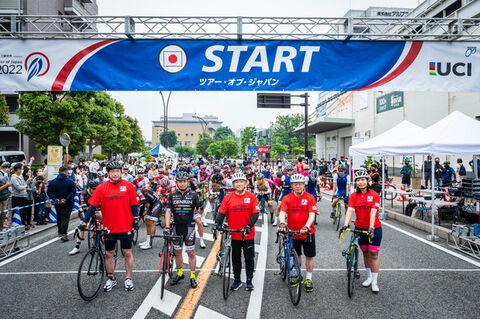 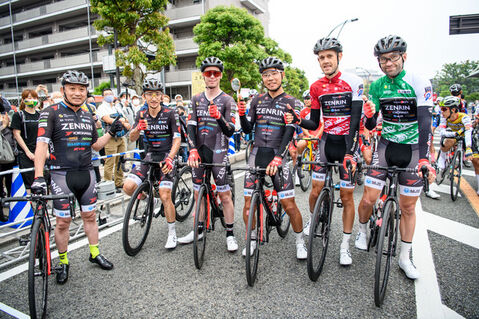 The third day of the Mitsubishi Estate presents Tour of Japan 2022 came to Sagamihara stage which was held for the second year. The ceremonial ride (400 meters) started at Hashimoto Park in Sagamihara city, Kanagawa prefecture, followed by a 4.6km neutral section and an actual start at the point where the race passes Ogura Bridge, a scenic spot selected as one of the "100 Best Bridges in Kanagawa". The riders raced the circuit course around the Toriihara Fureai no Yakata for 7 laps. 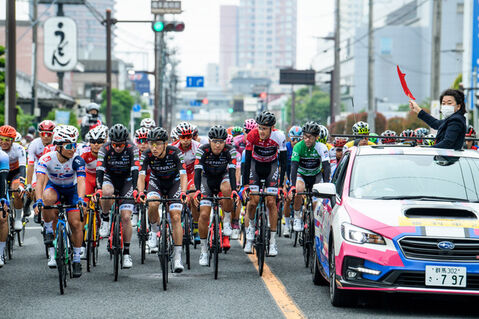 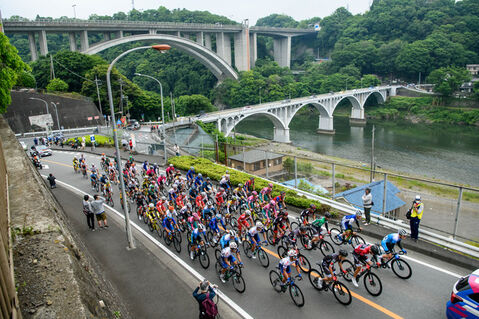 It was a survival race in the heavy rain, with a fierce battle of attacks lasting for over an hour. On the 4th lap, a breakaway of eight riders including Tetsuo YAMAMOTO (TEAM BRIDGESTONE CYCLING), Oka ATSUSHI (EF EDUCATION-NIPPO DEVELOPMENT TEAM) and Yuzuru SUZUKI (AISAN RACING TEAM) was formed. TEAM UKYO, which holds the race leader, began to control the front of the main group, and the race finally settles down here.

The race moved on the 6th lap. The escape of eight riders made a time gap of 32 seconds to the chasing group and 1 minute 52 seconds to the peloton. During the climbing section in the latter half of the 6th lap, the chasing group caught up with the breakaway and formed a strong breakaway group of 19 riders. The escape made a gap of more than two minutes to the peloton which means the group might hold on to its lead.
On the final lap, Leonel QUINTERO ARTEAGA (MATRIX POWERTAG) took advantage of a downhill section to attack from a breakaway of 19 riders. Ryan CAVANAGH (VICTOIRE HIROSHIMA) and Tetsuo YAMAMOTO joined the attack and tried to break away, gaining about 10 seconds on the rest of the pack. But it was again absorbed as they entered the uphill section. With 5km to go, while riders in the front group repeated attacks and checks, MATRIX POWERTAG which had three riders in the escape took the lead and the sprint began at the point of 500m to go. Atsushi OKA, who was well-positioned and turned the last 100m corner in the lead, overtook the rest to finish in first place. Leonel QUINTERO ARTEAGA placed the second with winning the Blue Jersey (General Individual Points Classification) as of today. Nathan EARLE (TEAM UKYO) retained the Green Jersey (GC). Marino KOBAYASHI (MATRIX POWERTAG) overcome to win Red Jersey (King of Mountains).
White jersey(Young Rider) was won by Yasushi Miyazaki (Utsunomiya Blitzen). 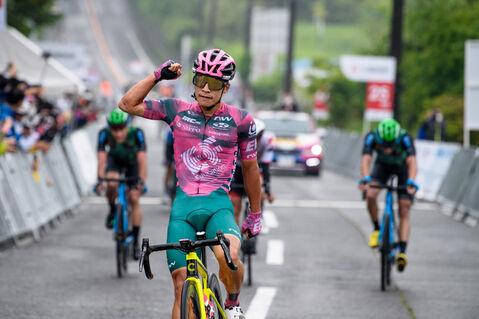 Atsushi OKA (EF EDUCATION-NIPPO DEVELOPMENT TEAM)
“Thank you very much for your support. As an overseas team, we knew we had to achieve some kind of result. Today, I set out from the beginning with the intention of escaping and winning at any cost. I am very happy that I was able to escape and finally win the stage. The sprint began with the exhausted legs for all riders, so I took the lead just before the last corner and from there I struggled to the end. It was my first time winning a UCI race on the road, so I am really happy.”
*OKA won the individual time trial in Sakai stage of the Tour of Japan 2019.

Nathan EARLE (TEAM UKYO)
“It was a short stage, but very difficult. The pace was fast all day. I think every team today was looking for the stage win, so our priority was to keep the leader’s jersey stay and, in the end, it was a successful day for us. It is very exciting to wear this Green Jersey in the last stage and very special for me. We have a sprinter here, Raymond. Tomorrow is the day for him. We are looking forward to tomorrow.”

Marino KOBAYASHI (MATRIX POWERTAG)
“I started the day wearing light clothes, and although my body was moving, it was really cold and hard. Fifth place in GC was not the result we wanted, so we knew we had to win a stage or take a jersey of some kind. We aggressively tried to win the King of Mountains prize. Tomorrow, the team will be aiming for a stage win, but I will give it my all because I am a local, from Tokyo.”